From tools to tractors, batteries are playing an increasingly important role in agriculture. As battery technology advances, the farming industry is finding a broader use of applications for batteries in many areas. Batteries for agricultural purposes are lighter-weight and last longer than ever before, which makes them a go-to choice for performance, systems operations, and cost savings. If you want to know how batteries can improve your agricultural activities, Northeast Battery has the answers.

Traditionally, batteries used in agriculture were made of lithium ion. However, ongoing research has led to the development of other batteries, including the lithium sulfur battery. A lithium sulfur battery, which is also called an Li-S, has the potential to carry five times the amount of energy that a traditional lithium battery holds. Agricultural batteries are also made of magnesium and iron, which creates more durable batteries with a greater charge capacity. Lithium oxygen batteries, another new development, produce more power than most other types of batteries on the market.

As energy efficiency is gaining more traction in the agricultural industry, corporations are expanding their investments in manufacturing for batteries and battery-powered equipment. Tesla, for instance, which is a well-known name in the electric car industry, recently opened a $3.3B battery factory in Nevada called Gigafactory. This Tesla factory is dedicated exclusively to creating batteries for the agricultural sector. If the current rate of investment continues, experts predict that production of agricultural batteries will increase by four times the present production rate over the next decade. In addition to increasing the volume of battery production, increasing investment also enables additional research and development to make more efficient batteries.

Today, batteries are used in more electric-powered agricultural applications than ever, including:

Just as automakers are producing vehicles with electric and hybrid motors, agricultural companies are starting to make tractors that operate with similar mechanical configurations. Diesel tractors, electric tractors, and tractors with a hybrid gasoline engine and battery are increasingly common. John Deere, for example, has recently created an autonomous tractor powered by electricity. The tractor is quiet and produces virtually zero emissions. It is low-maintenance and has a total power output of 500 kW.

Electric-powered drones and power tools have also recently entered the agricultural market. Electric drones are being used in crop production and weed control. They can detect weeds and schedule spraying accordingly to target specific plants while staying within a specific boundary. Power tools such as electric saws are also appearing on farms across the country.

From drones to trucks, batteries are playing an increasingly important role in agriculture. Contact Northeast Battery for more details on the role of batteries across the agricultural industry and how battery-powered equipment can help your farm.

Although motorcycle batteries inevitably have a finite lifespan, there are some ways to make a battery last longer. Proper maintenance and care for a battery plays a large role in its longevity, but the type of battery you buy for your motorcycle also determines how long it will last. Northeast Battery can help you find the right battery for your motorcycle and provide additional tips and information on extending the battery’s life as long as possible.

No matter what kind of battery your motorcycle uses, one of the best ways to make it last longer is to keep it fully charged. The frequency at which you charge your bike’s battery depends on how often you ride. If you ride every day, the alternator will typically keep the battery charged to full or nearly full capacity. However, the battery naturally drains electricity if you don’t ride very often or keep your motorcycle stored for months at a time during the winter. If your bike is in storage more often than you have it out on the road, you should consider getting a battery charger to keep the battery charged.

Like cars, motorcycles need periodic routine maintenance to stay in top form. Motorcycle batteries also have a recommended maintenance schedule that you should follow for safety reasons and to ensure your battery lasts as long as possible. A mechanic can perform a detailed inspection of the battery if you’re not sure how to maintain it on your own.

Depending on your comfort level in servicing batteries, some of the tasks that you can perform include checking the battery’s terminals for corrosion or signs of deterioration. If you spot either problem, you may be able to remove some dust and other contaminants with a wire brush. If that doesn’t solve the problem, a mechanic may need to replace the damaged parts. If the battery’s levels of distilled water are running low, they should be replenished enough so that the plates are submerged. Conventional batteries should also have adequate levels of electrolytes. The motorcycle’s battery power levels should also be tested occasionally to ensure there is enough power remaining. As with car batteries, batteries for motorcycles will lose power as they age and need to be replaced.

Ideally, you should perform maintenance on your motorcycle’s battery at least once every month. Even skipping just one service interval can impact the life of the bike’s battery.

Use the Right Battery

Another way to make your battery last as long as possible is to use the right kind. Your motorcycle’s manual explains the specific type of battery you should use. Motorcycle batteries come in various sizes, and they are made by many manufacturers. Northeast Battery will gladly help you choose the right battery for your motorcycle.

No matter what kind of motorcycle you ride, having a healthy battery is key. Maintaining the motorcycle’s battery can eliminate the need for replacing the battery sooner than necessary, which in turn saves money. A healthy battery also makes your bike safer to ride, and it can enhance the performance of your motorcycle. 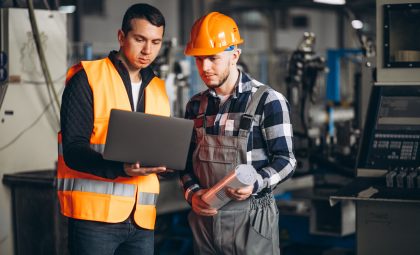 Our specialists can help with your battery search
We can help